What’s up with native?


OK, it’s been a while since my last update and it hasn’t happened too much.

Reason is simple: Apple ran out of these cool 36-hour iDays so Coolio and I had to live along with that old, analog 24h version 🙁 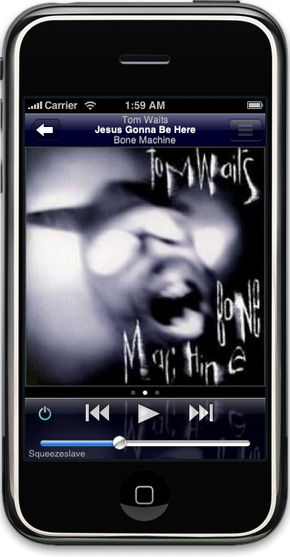 Along comes the big issue that MobileSafari for the time being tuned out too slow and too buggy to handle all the cool stuff I tried to include in the 0.6 skin/plugin version, so I had to drop that one 🙁

OK, back to native.

Recently I DID finally find a bit of time to continue working on it and now it’s progressing a bit.

It still doesn’t do too much (just a menu placeholder and a NowPlaying screen) but there’s quite a bit of under-the-hood logic already in place so I actually see it progressing every day right now.

Given past experiences and uncertainty of supply for iDays I will NOT make any predictions on WHEN this is gonna come but I’ll keep you updated and given the current pace I think about a month more could get me something release-worthy.

Coolio and I don’t get along without teasers, so here’s a screenshot of NowPlaying as it looks today. It may not be a lot, but at least I can say that everything you see there works already…

So now it’s up to you: spot the differences 🙂