This section is meant to give an overview over the new features in iPeng 1.1, directed at users of older iPeng versions.

Probably the biggest change in iPeng 1.1 from a usability standpoint is the

introduction of SqueezePlay menus for plugins or functionality not originally supported by iPeng.

Short: A SqueezePlay menu is a menu not provided by iPeng itself but by SqueezeCenter or a 3rd party plugin. This is a bit similar to the Internet Radio menus – these are also server provided – but it goes a bit further in that for a SqueezePlay menu iPeng will not only not know what the Content of the menu is but iPeng also doesn’t know what the Commands provided by the menu are.

Since SqueezePlay menus are not provided by iPeng, they may behave differently than other iPeng menus do.

Now what is this? SqueezePlay menus are originally designed for the Squeezebox™ Controller (SBC) and the SBC has several hardware buttons: Play, Add, Skip…. These buttons can have programmable functionality and this is what the commands are. iPeng supports four of these commands: Play, Play-Hold, Add and Add-Hold, these are the most widely used commands and for a typical browse menu they are equivalent to iPeng’s Play, Add, Add-Next and Context Playback Modes. You don’t know what Context is? We’ll tell you below.

However, this may not be true for all plugins, depending on what the plugin author thinks these buttons should do, they may have a different functionality. iPeng will show these Command states with a white background to tell you when you see a SqueezePlay menu and when it’s an iPeng menu.

There are further differences:

You can toggle between these commands as you would toggle between iPeng’s native Playback Modes, yet iPeng will not keep the state for a new menu because since most SqueezePlay menus are not normal browse menus, you will often not want to execute the same command on the next menu level.

Confusing – maybe. But since iPeng can’t know what a menu does, it’s hard to optimize usability. We have made some proposals on how to enhance this functionality but until this is implemented in SqueezeCenter, we believe the current solution is the best compromise.

In addition to this, SqueezePlay menus can have a number of additional items not known from other iPeng menus, but these are typically easy to understand, so probably no surprises here:

iPeng’s own browse menus have one additional feature and that is the introduction of a fourth Playback Mode. Besides the already known Play, Add and Add-Next modes there is now a fourth one, the Mixer/TrackInfo mode. This mode has a somewhat different meaning between Menus showing a list of Tracks (that is: an Album or a Playlist) and other menus, the difference will be obvious since there are different symbols in both cases:

This is the Mixer or Context mode and it will show up for Albums, Genres and Artists. When you use touch-and-hold in this mode (or click an album cover), iPeng will present a context menu. This context menu is mainly for 3rd party plugins and it will contain functions to execute on plugins for the selected Album, Artist or Genre. Through this functionality you can for example generate a Dynamic Playlist or a MusicIP mix, depending on which plugins you use.

This is the TrackInfo mode. Whenever used, it will present a TrackInfo menu for the selected track. This is where SqueezeCenter provides track specific context menus and plugin commands, e.g. for Album Info, Biography, or Music Services (e.g. “on Rhapsody” or “on Last.fm”). You can also start here for further browsing, for example to get other albums by the artist for a track. TrackInfo is a very powerful tool to provide you all kind of information and functionality around a certain song. This is equivalent to what you get when you select a track in SqueezeCenter’s web interface.

The other major change between iPeng 1.0 and 1.1 is the introduction of SqueezeNetwork support.

SqueezeNetwork generally is just a Music Source like your local server, but it behaves differently in tho ways:

Switching between SqueezeCenter and SqueezeNetwork 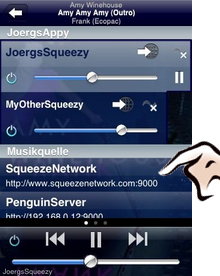 From iPeng’s perspective, SqueezeNetwork is a server (or Music Source) like any SqueezeCenter is, too. So it will show up where iPeng shows servers, which is on the MultiPlayer control within the NowPlaying page. This is where also your players show up and you reach it by doing a Swipe Right on the NowPlaying screen (see NowPlaying). If you have only one server, you might not have noticed this feature before since you will only see several sources when at least two are available. When you select SqueezeNetwork, iPeng will disconnect from your local server and connect to SqueezeNetwork instead.

Connecting to SqueezeNetwork the first time

When you connect to SqueezeNetwork the first time, you will have to pair your device with your SqueezeNetwork account. This is the same process that you have to undergo for each of your players.

iPeng will prompt you with a 5-character PIN-code and ask you to enter this in SqueezeNetwork. Then you have to go to www.squeezenetwork.com, log into your account and enter the PIN code under Players->Add A Player. It will then show up in your list of players as “iPeng/1.1.0“. You now have access to SqueezeNetwork with iPeng.

Switching Players between your server and SqueezeNetwork

The Players on the MultiPlayer control will now have an additional button that you can use to switch them to SqueezeNetwork (when connected to your server) or back to the server they were last connected to (when on SqueezeNetwork).

Note: Your player will have to be paired with your SN account before you can switch it to SN with iPeng 1.1. This means, you can NOT switch a player to SN if it has never been connected to SN before!

Also Note: Disconnecting a player from SqueezeNetwork or a server can take up to a minute so don’t be surprised when it will not immediately disappear from the old source. When you switch to the new source, you will see that the player does immediately connect to the new source.

The Settings menu is now a top-level menu for several types of settings, most of which are provided by the server as SqueezePlay menus, these are mainly player specific menus.

iPeng 1.0’s Settings menu is now called iPeng Settings and is a sub-menu of Settings. It has two additional options:

If set to On, iPeng will not diconnect from the server when it goes into sleep mode (screen saver mode) but will try to keep the connection open. This will speed up reactivity when the screen saver is being disabled.

Note: Since iPeng will keep communicating with the server, your iPhone/iPod will consume more power and drain the battery if you leave it running for a long time.

Per default, lower level Albums lists under an Artist (and only those) will be sorted by (Year, Name) in iPeng 1.1. If this option is set to On, they will be sorted by Name, mimicking the behavior of iPeng 1.0