You learned on the last page, that you can toggle the Playing Page with the button on the 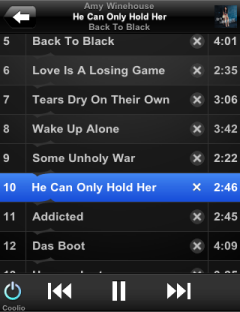 top right corner. The View you get when toggling away from the Cover screen is the Playlist View. It’s general layout it similar to the Cover View yet the Cover shifts out of view and the current playlist is being displayed. The toggle view icon switches to a small view of the cover. So far this is similar to iPod’s behavior.

Yet the playlist is different. Actually the very fact, that it’s a playlist is different form the iPod application, which would show the Album of the current track here. But Coolio is a lazy penguin, he likes to have easy access to all his stuff, and since he thinks in playlists, he wants them here. And he wants to do some stuff with them as well…

If you want to scroll the playlist, this does not work with a flick, since the layout of the page is fixed and it is only an area that scrolls. You have to use panning, that is scrolling with TWO fingers touching the screen. Coolio hates this, he doesn’t have fingers and so he has to use both his wings to pan, which looks rather uncool. And it’s slow as well, but there is no other option if you don’t want to break the layout.

SqueezeCenter arranges every list in pages. However, for the playlist we prefer to have the whole list accessible at the same time. So when, while panning, you reach the end of the playlist page (the number of tracks being loaded at a time by SqueezeCenter), iPeng issues an Ajax call to the server and preloads the next page. This way you can scroll through your whole playlist. Please note that this may have a short delay if you have a slow server or connection.

Each line in the playlist shows (from left to right) the position of the track in the current playlist order, the Track Title, an “x”-Icon and the track’s duration.

The current track is being highlighted in blue. If you click on a different track, iPeng will switch to that track.

Note: Only the Track title may be used to select a track, not the track number or the track duration.

Deleting Tracks from the Playlist

Clicking on the “x” next to the track title will remove this track from the playlist.

As mentioned before, Coolio wants to have full access to his playlists while listening to them. That includes rearranging them. Now how to do this on such a small screen?The easy way would be drag’n’drop, yet mobile Safari doesn’t support that. More Icons? Ugly, uncool, un-penguin-like. After some trial-and-error coolio and I cameup with another solution: you can click the separating lines between the tracks.

You didn’t wonder why there is a little flip symbol on the line above the left side of the track title, didn’t you? Now, it’s to indicate this feature. If you click on the line, the track above and below it will be exchanged. This way you can re-arrange your whole playlist at a wingtip.

You think it’s too difficult to hit the line? Try it! Your iPhone has a self-learning algorithm to detect which elements were clicked on the screen and with a little training you can hit the lines almost without error. It even works with a wing! If you still think it’s too difficult, try to click between the track numbers or duration figures, there’s no selecting of songs here so there’s nothing you can do wrong.

Note: If you have a slow connection or slow server (actually: typically it will be a slow player, especially SoftSqueeze), there may be a slow delay until the flip is actually shown since iPeng waits for the server to confirm the change. If we didn’t do this, the list would mess up.

Wanna be real cool, watch this…